This summer, Hogan Lovells US LLP hosted the 10th annual “Getting a Head Start on Pro Bono” Program. Just over ten years ago, two then young associates from Hogan Lovells, Carmen Cartaya and Clayton Solomon, happened to be having dinner at a charity ball at the same table with the head of Dade Legal Aid: Karen Ladis. At that moment, they had the great idea of having a summer event for all the summer associates and law clerks at the firms in Miami. The idea of the event was to introduce the summer associates to the importance of including pro bono work as part of their careers.
The event started as a lunch presentation. Judges would come and speak, and often former pro bono clients would come to speak about how meaningful a certain lawyer was handling their case. Judge Stanford Blake, a regular speaker at the event, would inevitably tell everyone Hogan Lovells was serving lobster, so people kept coming, and the event grew every year. Although lobster was never served, in more recent years, the event became an evening reception that celebrated pro bono with libations, passed hors d’oeuvres and great networking with the newest generation of lawyers from Miami’s most outstanding law firms. As always, the event featured a group of selfless judges who came to freely share their own thoughts and impressions of pro bono work.
Of course, what would be the tenth anniversary of the event coincided with some rather unprecedented world events. Rather than postpone or cancel, once again, Hogan Lovells and Dade Legal Aid worked together in order to celebrate the decade anniversary of the event by hosting an entirely virtual event with a star-studded game of Pro Bono Jeopardy!
The event had a huge turnout of attendees that included over 80 students and summer associates from fantastic firms, in addition to numerous judges and Florida Bar dignitaries such as Steve Davis, as well as Bob Josefsberg (who happened to be the answer to one of the Jeopardy questions) and Patricia Redmond, both are former Tobias Simon Award Recipients. The program was fun, entertaining, and really sent home the pro bono message.
For the Pro Bono Jeopardy game, retired Judge Stan Blake was the host. The three contestants were: Florida Bar President Dori Foster-Morales, Third District Court of Appeal Judge Ed Scales, and Federal District Judge Roy Altman. Alvin Lindsay, the Pro Bono Chairman for the Miami Office of Hogan Lovells, narrated the program and even performed the voice of “Johnny” – introducing the host and various contestants as well as Karen Ladis, the Executive Director of Dade Legal Aid, who spoke a few words. In addition, Chief Judge Bertila Soto of the 11th Judicial Circuit made a special guest appearance, as did Carmen Cartaya, who is now a trial attorney at the EEOC, and Clayton Solomon, who is now a trial attorney with the DOJ in DC.
The script, including the questions for the three rounds, was written by Hogan Lovells’ summer associates, Jake Weiner and Evan Robinson with assistance from the Dade Legal Aid team. The Jeopardy board was run by Hogan Lovells’ attorney, Victoria DeBayle, who has been coordinating the event for the past four years.
While Judge Altman won the game based on number of points, all of the contestants were winners for making the game so fun and engaging for all of those watching and for speaking so eloquently on the importance of pro bono work. While many are volunteering to take on Judge Altman next year, many others will be volunteering for pro bono work with Put Something Back Pro Bono Project thanks to the inspiration of this great group of judges who came together for the cause, as well as the ever-inspiring Karen Ladis. 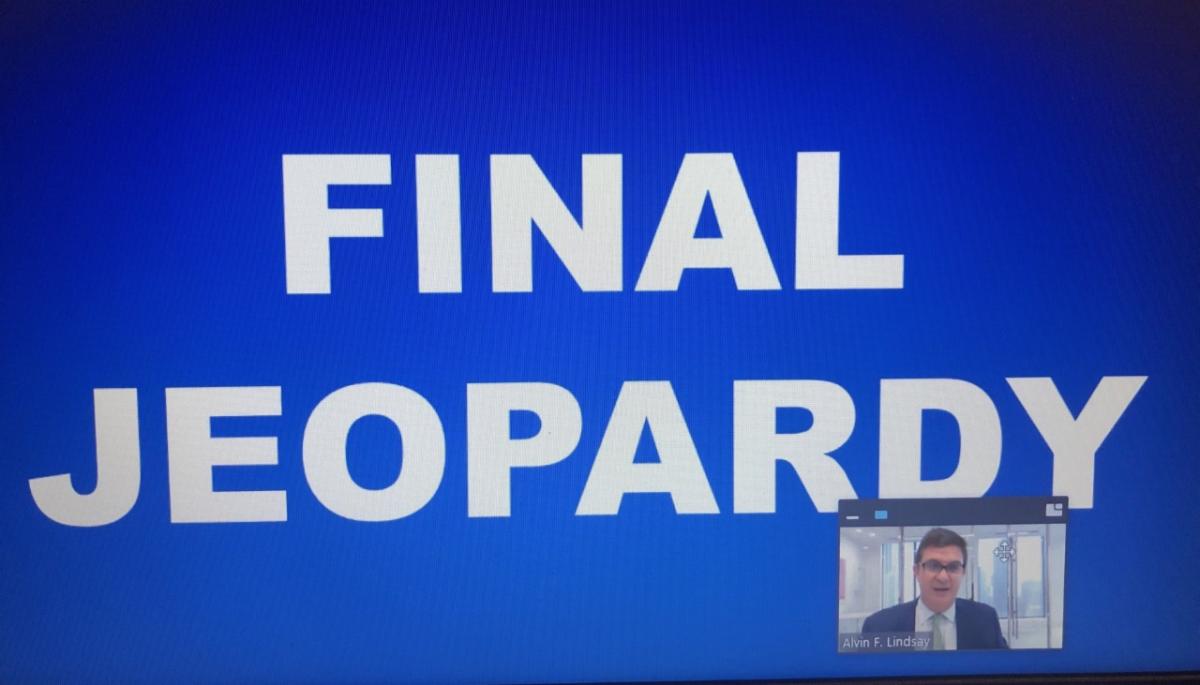 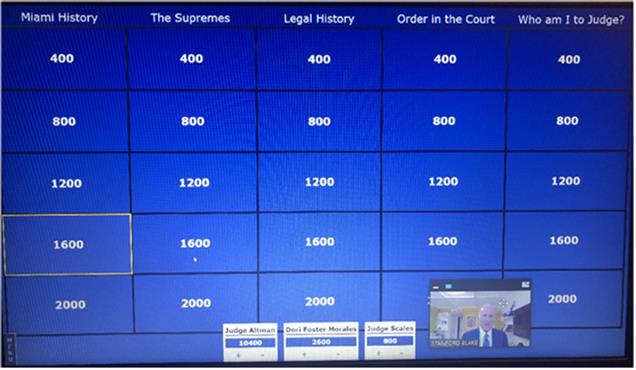 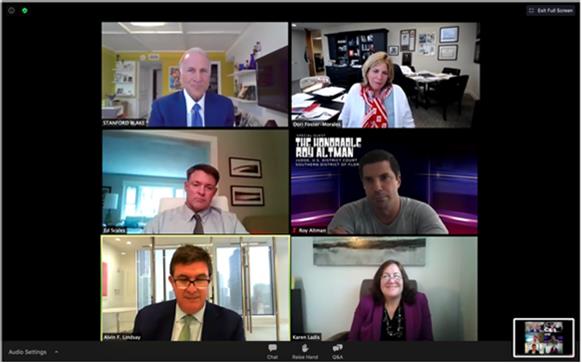